Each year this committee considers the selection of one or more members of the Pacific Northwest Section for the Powell-Lindsay award. The committee consists of five members who are all past recipients of the award.

The award is presented at the Section Annual Conference to someone whose service to the section is representative of the extraordinary service of W. H. Powell and Alexander Lindsay. This is the highest award the Pacific Northwest Section presents. 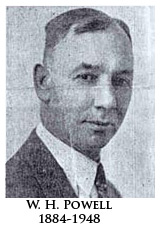 Bill Powell was born in Pictou County, Nova Scotia, Canada and studied at St. Francis Xavier University and McGill University, Montreal, Quebec. He graduated from the latter with a degree in engineering in 1909.

He started working as a land surveyor in Alberta in 1909 and in subsequent years served as assistant on the Dominion Hydrographic Survey near Prince Rupert.

Powell became City Surveyor for the City of Vancouver, British Columbia in 1912. He remained in that position for many years, working also as a field instructor and lecturer in geodetic surveying, astronomy, and hydraulics at the University of British Columbia.

He joined the Greater Vancouver Water District as engineer at the time of its organization, in 1928. He served the Water Board in this capacity until three weeks before his death, in 1948.

Powell joined the Engineering Institute of Canada in 1907 asa student and remained an active member. He represented the Vancouver Branch as Councillor of the Institute in 1928.

In 1934 he was awarded the Institute’s Gzowski Gold Medal for outstanding work in the engineering field, in particular, the First Narrows Pressure Tunnel under Vancouver Harbour at the First Narrows.

Three years later he was awarded the Institute’s Past President’s Prize for his paper “The Need of the Engineer’s Participation in Public Affairs.”

Powell was a Trustee of the American Water Works Association. 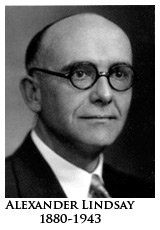 Alex Lindsay was born in St. Thomas, Ontario, Canada on December 28, 1880. After receiving his early education in his home city, he traveled to Purdue University in Lafayette, Indiana where he graduated in 1904 with a degree in Mechanical Engineering.

Mr. Lindsay came west after his graduation to do engineering work, principally in highway and railroad location, in Washington and Idaho.

In 1907, he was employed as Water System Design Engineer in the City Engineer’s Office in Spokane, Washington. In 1910, this engineering design function was transferred from the Engineer’s Office to the Water Division in the Department of Public Utilities. Mr. Lindsay became the Water Superintendent at that time, a position he occupied continuously until his death in 1943.

During his tenure as superintendent, Lindsay developed plans for the improvement of the physical system including new wells, pumping stations, reservoirs, water towers and miles of transmission and distribution mains. He also supervised the construction of these facilities as well as their operation and maintenance.

In Spokane, Lindsay is referred to as the father of the water system. He developed the department’s business policies relating to metering, rates, tapping, and main extensions, and managed its general administrative activities. His excellent planning and implementation techniques still guide the activities of the department.

Lindsay was one of the organizers of the Pacific Northwest Section of the American Water Works Association. He served as Chairman in 1930, received the Fuller Award in 1939 and was National Director in the early 1940s.